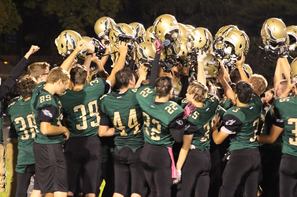 Something to build on: Enfield responded to challenge in posting first win
By KYLE MAHER
Wednesday, October 19, 2016 – JOURNAL INQUIRER 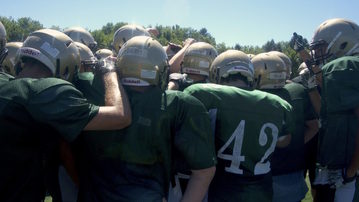 No one really likes clichés. A cliché by definition betrays a lack of original thought, so I apologize for the overuse of the following term…don’t you wish that sometimes life had a reset button that you can hit to get a fresh start??? Why in Enfield, that’s just the opportunity that the community-at large is going to enjoy in 2016.

​​Click Here to Read the Article and See The Video
Golden Bears Camp 2016
Thank you to the Western New England University coaching staff for the tremendous intensity and position specific instruction for our campers.
Save 20% at Dick's Sporting Goods - July 30 & 31
July 30 & 31 marks Youth Football & Cheer Appreciation Weekend at Dick's Sporting Goods stores in Manchester & Enfield.  Download the coupon below to save 20% on your entire in-store purchase!

​​ENFIELD – After repeated attempts to unite the Enfield and Fermi football teams were thwarted, the combined coaching staff managed to get a handful of unofficial unified workouts and scrimmages off the ground last summer.  They were looking ahead at the merging of the two populations and trying to jump-start the alliance.
Read MORE...
​Enfield’s school consolidation plan called for the closure of Enrico Fermi High School at the end of the 2015-16 school year after more than four decades of cross-town rivalry with the older Enfield High School.  Bringing together two teams that have been separated since well before the students were born presented a challenge, but new Enfield Eagles Head Coach James Lyver Jr. and his staff have been planning for this, and they are taking it head on.

On May 25, the coaches held a meeting for parents and players.  What could have been a run-of-the-mill gathering to review expected schedules, request updated physical exams, and remind attendees of the rules for student athletes instead became an opportunity for a mini pep rally. Here was a chance for the coaches to voice their enthusiasm for this long-awaited reunification of a town divided.  Poised and ready for this occasion, they seized it, bringing all of their listeners into the fold with inclusive language and a united message:  “One Town – One Team, Enfield Eagles.”

Attendees were at first tentative.  Fermi parents looked around at how much construction was still underway, three short months before the entire high school population of the town converges on the campus, ready or not.  Enfield parents, long ago resigned to the rebuilding process, shrugged at the seemingly never-ending development.  Groups of Fermi kids sat together, and Enfield students did the same, separate from each other, all probably expecting to be bored, but politely waiting to see what the coach would say.

Coach Lyver expressed joy that the town would finally boast a reunited football team, that kids who knew each other from town youth football, soccer and Little League in their younger years would no longer be separated for high school sports.  He introduced the coaching staff, many of whom graduated from Enfield and Fermi, and who are just as pleased to see the schools reunited after too long being divided.  Coach Lyver gave an impassioned introduction to the mission statement that the staff crafted.

The Enfield Football program is dedicated to helping Enfield’s young men grow into good men, and he assured parents of the coaches’ shared belief that sport is a venue for teaching kids life skills.  Football teaches young men how to work together toward a common goal, how to rely on each other and be reliable.

Then Coach Lyver looked at each of the players, called many by name, and asked them to introduce themselves to the crowd.  While speaking in front of a crowd is often nerve-wracking, the students complied, standing and saying their name and year, on after the other.  In this way the teams were officially introduced and the ice was broken.  At the close of the meeting, Coach Lyver walked the crowd to the gym to see the new space and the weight and workout rooms, both rivaling some nearby college facilities.

The students milled about the gym and weight room, talking and laughing, all looking forward to the start of strength and conditioning workouts in the new facilities in June.  These teams will come together without a problem – they already have.  May these young men lead the way in the integration of the town, showing all former Falcons and Raiders what it means to be an Eagle.